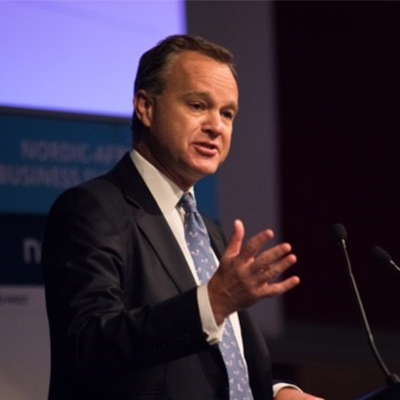 Rt Hon. Mark Simmonds was until recently The Foreign & Commonwealth office Minister with responsibilities for Africa, the Caribbean, UK Overseas Territories, International Energy and Conflict Prevention. He served as a Member of the UK Parliament for 14 years.  He was also a Senior Advisor to The Prime Minister David Cameron.

He focussed on driving and facilitating inward investment into Africa across a range of key economic sectors including Hydrocarbons, Financial Services, Infrastructure, Energy & Agriculture. He has a huge knowledge of the economic and political composition of African Governments, countries and regions.  He Chaired the UN Security Council on two occasions.

He also has roles with not for profit organisations, including as Honorary Vice President of Flora & Fauna International.  He is a Trustee of the British Institute in East Africa. He is a Member of Her Majesty’s Privy Council.
All speakers