Major merger in Angola – a sign of things to come?

Eni and BP have signed a non-binding Memorandum of Understanding (MoU) on merging their Angola upstream operations, including Liquefied Natural Gas (LNG).

Such a move would create a large-scale independent that would displace Total as the second-largest producer in the country and have the third most valuable portfolio. Under current plans, the approximately 250,000 bbl/d of production provides a strong foundation for the new entity to pursue new and existing opportunities in the country and beyond.
With the Majors beginning to retreat from large-scale investments and focus more on shorter lead-time projects for cash generation, the formation of such a joint venture allows for the sharing of future capital commitments. It can also bring operational synergies and create economies of scale in a country that still has considerable potential. Similar partnerships could follow elsewhere, with Eni and BP’s operations in Egypt one obvious candidate. 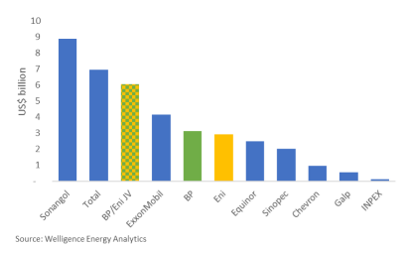 Assuming Eni and BP reach an agreement, it will be subject to government, regulatory and partner approval. We believe partner approval is a formality. It is possible the government will be hesitant, as it would prefer a more equitable spread of operators, but the country needs to retain the operational and financial ability of the Majors.

The formation of a joint venture company is not new for either Eni or BP. In the last five years, both have established similar ventures in Norway – in June 2016, BP merged its portfolio with that of Det Norske to form Aker BP, and this was followed in December 2018 with the creation of Vår Energi, through the combination of Eni’s portfolio and Point Resources. The new entities operate independently and are two of the largest producers in the country.

This JV model has been proven to work and may now be trialled in West Africa. In our November 2020 note, Angola and the Majors – is a shake-up on the horizon?, we questioned the long-term commitment of the peer group to the country. Portfolios were maturing, and the shift towards new energies had brought capital allocation into sharp focus. We speculated that asset sales could be on the cards but bringing in the Norway JV model is the other option.

Operational focus and Cash Generation: Under the Eni/BP plan, the proposed entity will be a self-funding company wholly focused (at least initially) on Angola. This should result in greater operational and financial focus, and increased scope to exploit existing opportunities that fit the needs of the new entity versus global E&Ps. For instance, fully harnessing the short and medium-term cash generation potential at Block 15/06 will be a focus.

Technical expertise: Both Eni and BP have extensive in-country knowledge and subsurface expertise. These skills set, plus a production base generating significant free cash flow, puts the combined entity in a strong position to pursue new development and exploration opportunities.

Cost savings: Combining the portfolios of Eni and BP will allow for operational synergies.

We were confident in Eni’s long-term commitment to Angola, but BP’s position had been questioned. The company had been slow to develop its Block 31 PAJ cluster, and its other operated assets have seen minimal spend. This proposed merger would appear to put those doubts to bed. The new entity will become one of the top producers in West Africa, and second only to state company Sonangol in Angola on a working interest basis. 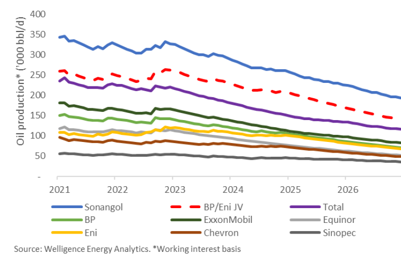 The new entity will also have one of the largest portfolios in Angola, with stakes in 18 producing projects (Block 20 is expected to start in 2028), plus the second-largest stake in Angola LNG (ALNG). It will operate four producing projects, double the number of both Eni and BP. It will also inherit Eni’s operatorship of the New Gas Consortium, a group charged with helping backfill ALNG, and hold the largest stake in the group - a combined 37.4%. The JV would also have exposure to five exploration blocks (Cabinda North, Cabinda Centro, Block 1/14, Block 28 and Block 29). 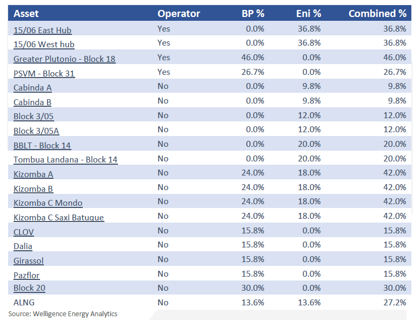 A key growth project is the Eni-operated Block 15/06. The company scored an Infrastructure-Led Exploration (ILX) success earlier this year with the Cuica discovery (200-250 MMbbl in-place) and has plans to drill an additional two exploration wells. Partner Sonangol is looking to sell part of its 48.7% stake as part of an effort to strengthen its finances. This presents an early acquisition opportunity for the new entity in an asset it controls, knows well and which still has running room. We would also expect to see renewed impetus given to develop the BP-operated Block 31 PAJ cluster.

There is also scope for the company to divest as it holds several small, non-operating stakes. It will have a large 42% stake in the ExxonMobil-operated Kizomba complex of projects. Although ExxonMobil wants to exit, we don’t see the JV as having operatorship ambitions. The complex is produced through four ageing FPSOs and well past its peak. Given the commitment of both Eni and BP to reduce carbon emissions, selling the more mature assets could be more likely.