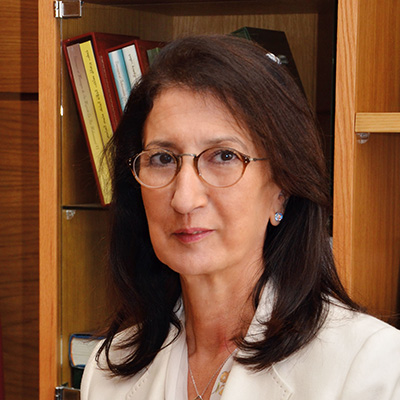 
Civil Engineer of Mines from the National Superior School of Mines of Nancy in 1987, Mrs. Benkhadra is also a Doctor Engineer in mine sciences and techniques (ENSM Paris). She also had management trainings at the University of Columbia in the year 1990.
Her career started in 1982 at the Mines Research and Participation Office (BRPM) where she held several positions of responsibility in the feasibility of mining projects and the management of the portfolio of more than 30 subsidiaries of the previous BRPM.
In 1994, she was appointed Director of Mines at the Ministry in charge of Energy, Mines, then Secretary of State in charge of mining sector development (1997-1998). As such, Mrs. Benkhadra led and supervised the implementation of a new strategy for the mining sector development.
She became Director of the BRPM in 1998, then General Director of the National Office of Oil Research and Exploitation “ONAREP” (August2000 – November 2003), before getting appointed as a General Director of the National Office of Hydrocarbons and Mines (ONHYM) on the 11th of November 2003, where she contributed to the reform of the previous ONAREP by implementing a policy of exploration promotion. She conducted the merger of BRPM and ONAREP and supervised the creation of ONHYM.
In October 2007, she was appointed as a Minister in charge of Energy, Mines, Water and Environment. As such, Mrs. Benkhadra contributed to the implementation of  new energy, water and environment strategies by the launch of many programs, particularly in the renewable energies field and the enactment of new laws and decrees.

International activities: Promotion of renewable energy and sustainable development. President of the Moroccan delegation of symposia on mining investment in Africa organized by MIGA (World Bank Group) in Montreal and Denver.

Associative Activities
Awards: Wissam Al Arch, the order of Officer - Prize for Arab-European organization for environment-Legion of Honour from the Republic of France-