Can ReconAfrica bring Namibia to the producer’s table?

Has ReconAfrica discovered the next producing basin in Africa? The Canadian junior has reported promising results from its second stratigraphic well in Namibia’s frontier onshore Kavango Basin.

ReconAfrica is confident it has proven a working petroleum system and market reaction has been very positive. But commerciality is still far from established – what are the uncertainties and next steps to be overcome to reach first oil? 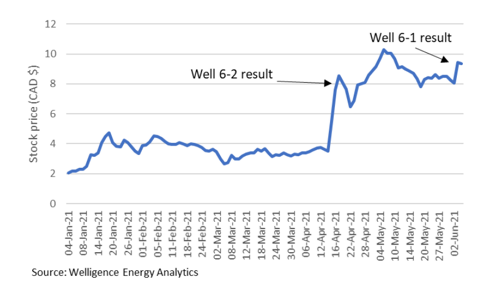 A challenging path to commerciality

Only oil and gas shows so far: Both wells drilled to date are stratigraphic. The presence of hydrocarbons are proven and a working petroleum system established. The company believes it has a conventional oil play on its hands, but no oil or gas has flowed to the surface. This will be key to determining the scale of development. ReconAfrica plans to drill two more wells in 2021 and acquire 450 km of 2D seismic – further drilling is anticipated in 2022.

Remote basin with limited infrastructure: ReconAfrica controls all licensed acreage (35,000 km2) in the Kavango Basin, which straddles northern Namibia and Botswana. But it is an inland basin and the two wells drilled so far are more than 700 km from Walvis Bay, on Namibia’s Atlantic coast. This is where oil output would be transported, via road and rail. Walvis Bay does have existing oil infrastructure which would enable export relatively easily. While the road and railway networks are well established and of good quality, upgrades would be needed. The cost of transport will be high and this will have a knock-on effect on project economics. Longer term monetization options include a dedicated pipeline to Walvis Bay and potentially a refinery. 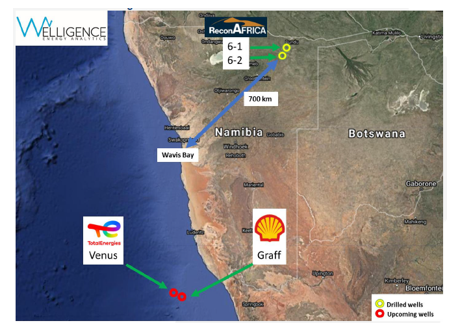 Fiscals are good but size will be everything: The Concession fiscal terms in Namibia are attractive and designed to incentivise exploration. Royalty is 5% and corporate income tax set at 35%. In Botswana, the royalty is 3-10% and income tax 22%. ReconAfrica has estimated gross unrisked P50 prospective resource across its Namibian and Botswana acreage of 1.2 billion barrels of oil and 47 tcf of gas.

There are only a handful of analogues to a potential Kavango development: ExxonMobil led the Doba oil development in Chad, which involved a 1,070 km pipeline to the coast of Cameroon, over 700 wells, and the recovery of around 1 billion barrels. Tullow’s South Lokichar development in Kenya (in partnership with TotalEnergies and Africa Oil Corp.) is progressing after being re-designed to cut costs. The project will export oil through a 824 km pipeline and has STOOIP estimated at 1.5 bnbbls. But it is unlikely to achieve FID until Tullow can farm-down some of its 50% stake and first oil won’t be before 2026.

Any Kavango development will be reliant on the commercialisation of oil: Even a truly monstrous gas find would struggle to find a market. Sub-Sahara Africa is laden with stranded gas resource in far more favourable settings.

Wanted! A well-funded partner to help with development: ReconAfrica has the funding to complete its planned exploration program, which comprises up to four additional wells and the acquisition of 450 km of 2D seismic. However, the company holds 90% in the Namibian licensed area (NOC Namcor holds the remaining 10%) and 100% in the Botswana licensed area – a partner(s) will be needed to help fund, and possibly operate, full development. The current plan is to formally open a farm-out process in Q4 2021, with the aim of completing it in Q1 2022.

Staying on top of ESG: ReconAfrica’s activities are being closely scrutinized, and attention will only increase in the event of a commercial development. The company has committed to at least US$8.3 million of “ESG expenditures” in the Kavango region – a detailed plan will be laid out within 60 days. While a large-scale oil development would provide a significant boost to the economy, the prevailing activism and hostility to new oil and gas developments, particularly in frontier areas, will mean ESG will need to be front and centre of any plan.

A big year for Namibian exploration

The positive results from ReconAfrica’s Kavango wells have made headlines. But it is not the only show in town, and two key exploration wells are set to spud in the deep waters of the Orange Sub-Basin of the greater Southwest African Coastal Basin before the end of the year (see map).

We consider TotalEnergies’ Venus well to be the largest Namibian prospect with a pre-drill of ~2 bnboe. It will be drilled on Block 2913B once the Maersk Voyager has completed the French Major’s Ondjaba well in Angola.

Shell is expected to drill its Graaf well on the neighbouring PEL 39 block around the same time as Venus. Shell acquired an additional 45% stake in the license from Kosmos Energy in 2020 as it increased exposure to the Southern Atlantic Conjugate Margin it was previously under-weight in.

Namibia has some of the best and most dramatic sand dunes in the world. The next six to twelve months will show if its reservoir sands are similarly world-class.